The study of flags, known by the official-sounding term vexillology, has interested me since the 7th grade. Thus, I wish to start an irregular series of posts on the history and symbolism of various flags from around the world, starting with Scandinavia (Denmark, Norway, Sweden). Why? Suffice to say that my sister and I have had an interest in Scandinavia for as long as I’ve had an interest in flags. 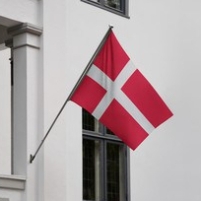 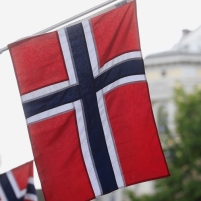 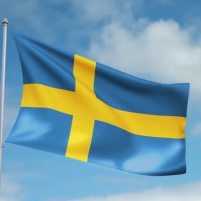 The oldest still-extant flag in Europe, Denmark’s national flag dates back to the 14th century, though the nation only officially adopted it in 1625. It features, as do the other Scandinavian flags, the Scandinavian cross. Really, the flags of others Nordic countries  (which includes Finland and Iceland) are adaptations of the Danish flag, with its solid color background and horizontal cross.

Denmarks call their flag Dannebrog – “the flag of the Danes” or “the red flag.” Legends surround the emergence of the Danneborg, among them the most popular about King Valdemar II at the battle of Lyndanisse.[1]

According to that folklore, King Valdemar II determined to invade Estonia in order to prevent further German advancement into the Baltic region. After the fleet landed in Lyndanisse, on June 15, 1219 the Estonians ambushed the Danes. Desperate, Archbishop Anders Suneson prayed for a sign of victory. As an answer, this red and white flag fell from heaven. The sight emboldened the soldiers, and Denmark conquered Estonia. (A lack of historical record casts this origin story in doubt, but it is nonetheless entertaining.)

The white cross on the Danish flag symbolizes the purity of the Christian faith.

During the Middle Ages, the kingdom of Norway (872-1397) raised a flag that featured a golden lion holding a machete against a red background. In 1397, Norway joined with the kingdoms of Denmark and Sweden in the Kalmar Union under a single monarch. The flag for this monarchy was inspired by the Danneborg, with red for the cross and yellow for the background.

This alliance lasted until 1523, after which point Norway and Denmark entered another union, along with the Duchy of Schleswig and the Duchy of Holstein, that held strong until 1814. Norway shared Denmark’s flag – white cross against red background – during that period.

Thereafter, Norway formed another union with Sweden to form the United Kingdoms of Sweden and Norway. For a few years Norway continued to use the Danish flag, with the addition of the old lion and machete from the medieval days in the upper left portion. Then, in 1821, Parliament member Fredrik Meltzer proposed a Norwegian flag that added a blue cross to the Danish flag. The flags of freedom-symbolic countries like the UK, US, and Netherlands inspired the color pattern.[2]

For about half a century, political struggles kept Norway from flying their flag alone. To avoid attacks at sea, the Swedish king added a badge, pictured below, to the upper left of the Norwegian flag. This badge blends the Norwegian and Swedish flags. After Norway and Sweden split in 1905, Norwegians embraced their true flag again.

Sweden’s national flag has historical roots in the 1500s and mythological roots in the 1200s. The supernatural origins of the Swedish flag resembles that of the Danish flag. According to modern legend, King Eric IX, during the Swedish crusade of Finland in 1157, saw a yellow cross blazing in the bright blue sky, which he took as a sign of God’s blessing over the endeavor. Like the story of King Valdemar II, this explanation is most likely fictional.[3]

Like Norway, the flag for Sweden began as the red and yellow Kalmar flag from 1397-1523. Sometime in the mid 16th, before the merger with Norway in the 1800s, the pattern and colors of the Swedish flag emerged.[4] The Swedish coat of arms inspired the blue-yellow color combination. Blue symbolizes truth and loyalty, while yellow symbolizes generosity.

During the alliance with Norway, the Sweden-Norway diplomatic crest emblazoned the upper left of the Swedish flag. A year after Norway, Sweden officially adopted the blue and yellow banner.

[1] Legends about the Danish flag

[2] Evolution of the Norwegian flag

[3] History and meaning of the Swedish flag

Find Abigail around the web