Economics studies wealth. More specifically, it studies the production and distribution of wealth through a society, and often assumes the rationality of humans (homo economicus). When discussing this subject, two men come to mind as having had most profoundly influenced modern economic thought: Adam Smith and John Maynard Keynes. (Some may include Karl Marx here, but he and his socialism are a topic for another post.)

Who was Adam Smith?

Adam Smith (1723 – 1790) lived during the Scottish Enlightenment in the mid-18th century and early 19th century. Eminent figures at this time included philosopher David Hume, who contributed to the development of critical philosophy; geologist James Hutton, who proposed the theory of uniformitarianism to explain the features of the Earth’s crust; and physician and chemist Joseph Black, who discovered magnesium, carbon dioxide, and latent and specific heat.

Five universities “powered” the Scottish Enlightenment, including the one which Smith attended, the University of Glasgow.[1] He began his education there at age 14 and ended at age 17. He studied for some time at Balliol College, a constituent of Oxford University, where he spent six years studying world literature and emerged with the flattering opinion that “the greater part of the public professors have, for these many years, given up altogether even the pretense of teaching.”[2]

Smith served as a lecturer at the University of Edinburgh for some years before heading the logic and then moral philosophy departments at his alma mater. A two-year tutor-student relationship with the Henry Scott, Duke of Buccleuch and stepson of Parliament figure Charles Townshend, gave Smith the opportunity to travel to Switzerland and France, where he met many intellectual giants, including Voltaire and Rousseau.[2]

After his work with the duke, Smith retired to his small home village of Kirkcady to pen his magnum opus, The Wealth of Nations, which he published in May of 1776, just four months before American patriots signed the Declaration of Independence. The writing took him ten years.

Who was John Maynard Keynes?

John Maynard Keynes (pronounced like canes) (1883 – 1946) was born at the turn of a century, during the latter years of the Victorian era when the economic structure, politics, and sciences in England were rapidly changing. Raised in Cambridge, Keynes had access to the cream of the intellectual British crop. His father taught economics at Cambridge University and his mother ran as Cambridge’s first female mayor.

Keynes attended the prestigious and expensive Eton College, a boarding school for boys, for his adolescent years, and went on to graduate with a degree in mathematics at Cambridge (1905). His intellect gained him one of the dozen spots in Cambridge’s secret society the Apostles, where university members discussed and debated various stimulating topics.[3]

In 1920, after serving for a year as senior Treasury official at the Versailles Peace Conference for the end of WWI, Keynes published his first book on economics, The Economic Consequences of the Peace, which considered the deleterious effect that the harsh terms dealt to Germany after the war would spell economic and political doom through Europe.[2]

After the stock market crisis of 1929-33, Keynes, who had “long before rejected laissez-faire as a general organizing principle in society”, broke entirely from classical economics to create his own economic theory.[2] His ideas appeared in his 1936 publication  The General Theory of Employment, Interest and Money.

How did their views on economics differ?

The laissez-faire, or classical, economics that Keynes rejected was the economics of Adam Smith. Adam Smith wrote The Wealth of Nations to present a state of economic freedom that differed from the mercantilism that endured in his day. Mercantilism encouraged exports and discouraged imports, and in this system governments protected the businesses of the mercantile class from foreign competition.[4]

Two main concepts are developed in Smith’s work: division of labor and the Invisible Hand. In the first chapter of The Wealth of Nations, Smith notes, “It is the great multiplication of the productions of all the different arts, in consequence of the division of labor, which occasions, in a well-governed society, that universal opulence which extends itself to the lowest ranks of the people.”[5]

A division of labor and the trade necessitated by the specialization of laborers works for the general good of society, though the participants in this work usually do not have this effect as a goal. This reality brings us to the Invisible Hand of Smith’s economics.

“By preferring the support of domestic to that of foreign industry, he [an individual] intends only his own security; and by directing that industry in such a manner as its produce may be of the greatest value, he intends only his own gain, and he is in this, as in many other cases, led by an invisible hand to promote an end which was no part of his intention.” [5]

The Invisible Hand of economics is a metaphor for the relationships among members of a free-market economy that improves the society at large. Buyers and sellers, through self-interested motives, will naturally regulate the economy.

Keynes’ economic theory marked a slight return to the mercantilism of old. Following the Great Depression in the United States, which sent shock waves through the economies of the rest of the world, many questioned the effectiveness of the classical economics that governed trade since Smith. Why wasn’t the Invisible Hand working? Here are thousands of able individuals seeking but not finding employment. What gives? 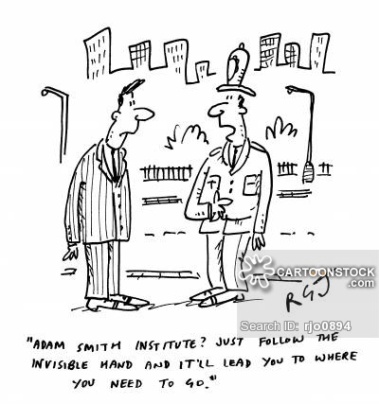 In mercantilism, merchants paid taxes and other expenses to the government for its support and protection of their operations. The government acted as a financial supervisor.

In response to the worker-work imbalance of the 20s and 30s, Keynes suggested that the economy still required government-supervised management to function. While Smith’s idea of the economy relied on the Invisible Hand and self-regulation, Keynes’ looked to government controls such as monetary policy, which concerns interest and money supply, and fiscal policy, which concerns taxing and spending.

Since the Great Depression and the New Deal programs of Franklin D. Roosevelt, the Keynesian theory has dominated economics in America. Politicians and policymakers are adamant about their positions concerning economics. Some praise Keynesian theory and others condemn it. Those who believe that the government has no place in public affairs promote the resurrection of classical economics.

What do you think about classical economics versus Keynesian economics?

[2] The Big Three in Economics, by Mark Skousen

[3] A Cambridge secret revealed: the Apostles

[5] The Wealth of Nations, by Adam Smith

Find Abigail around the web